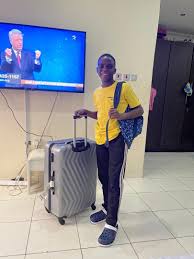 Father to Sylvester Oromoni has revealed that a black liquid was found in his son’s stomach during the autopsy on his corpse, Oyogist.com reports.

His son, Sylvester Oromoni Jnr was allegedly beaten by fellow students of Dowen College, Lekki, Lagos which resulted in his eventual death.

In a live interview streamed on Facebook with The PUNCH, Oromoni Snr stated that the family was told that the pathologist in Warri could not determine what the liquid was until it is taken to Lagos or Abuja.

He said, “According to the person that conducted the autopsy, they found a black liquid in his stomach, but he said the test to know what it was will be carried out by the police in Lagos or Abuja.”

Oromoni Snr had earlier stated that the matter had been reported to the Area Command, Warri, of the Nigeria Police Force while a petition had been submitted to the Lagos State Commissioner of Police.

He also said the family is waiting on the result of the autopsy carried out.

“We submitted a petition yesterday (Thursday) to the Commissioner of Police, Lagos State. We reported to Area Command, Warri first before we submitted the petition in Lagos.

The police in Area Command (Warri) contacted the pathologist, they carried out the autopsy yesterday (Thursday) and the result will come out. We were made to understand that they discovered something in his stomach.”

Since the incident came to light, prominent Nigerians have weighed in on the issue calling on authorities to conduct a thorough investigation of Sylvester Oromoni Jnr’s death.

Meanwhile, the Lagos State Government has ordered the indefinite closure of the school pending investigations.