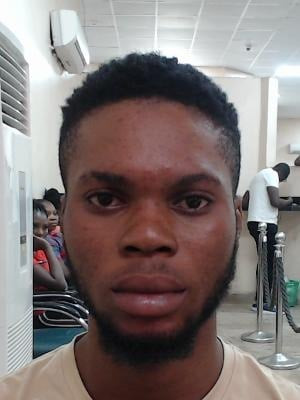 According to reports reaching oyogist.com, Operatives of the Economic and Financial Crimes Commission, EFCC, Lagos Zonal Command, have arrested a man identified as Precious Ofure Omonkhoa over his involvement in an investment scam.

Imonkhoa was arrested in the Ikoyi area of Lagos, following credible intelligence received by the Commission about his illegal activities.

A statement released by the antigraft agency says Omonkhoa allegedly posed as Moshem Cnich, a Swedish national, to defraud unsuspecting victims of their hard- earned money by claiming that he runs a bitcoin scheme, where people invest money to make huge returns.

‘Preliminary investigation also revealed that the suspect engaged in a dating scam and had defrauded two victims in Canada.

Upon his arrest, the suspect confessed to have laundered the proceeds of his fraudulent activities by purchasing a piece of land worth $150,000USD (One Hundred and Fifty Thousand United States Dollars) through bitcoin from CASA-Cubana, a project being run by the Cubana Group.

Upon his arrest, the sum of $50,000USD was found in his bitcoin wallet.”the statement read