US gives $127,000 grant to Osun state govt to reconstruct the Osun-Osogbo shrine 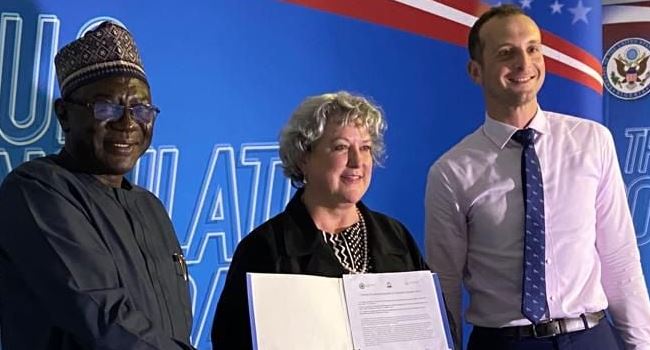 Acording to report reaching oyogist.com, the Government of the United States of America on Thursday commenced restoration work on a part of Osun-Osogbo shrine called Busanyin.

Speaking at the flag-off of the project in Osogbo, Osun State capital, the US Consul General in Nigeria, Claire Pierangelo, said her country would collaborate with the Osun State government to restore and reconstruct the monument.

Pierangelo, who was joined at the shrine by the Ataoja of Osogbo, Oba Jimoh Olanipekun, as well as the Chief of Staff to Osun State governor, Dr Charles Akinola, also said a grant of $127,000 had been earmarked for the exercise, which would cover documentation and reconstruction of the shrine.

She said, “Today, we are so proud to announce our partnership with the people of Osogbo and Osun state to help document and eventually restore this very important cultural site called Busanyin Shrine.

“We are working with local partners, American partners and the government of Osun state to make this a reality. This is a partnership between the US people and the people of Osun state to restore an important cultural site.