U.S. and China pledges to work together in combating climate crisis 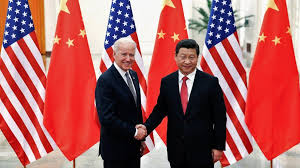 According to reports reaching oyogist.com, U.S. and China in an unexpected move pleged to work together to combat climate change crisis.

The pledge was made during the COP26 summit on Wednesday, as the duo vowed to work closely together on climate change this decade.

The world’s two biggest economies declared their intention “to work individually, jointly, and with other countries during this decisive decade, in accordance with different national circumstances, to strengthen and accelerate climate action and cooperation,” a statement issued during the Summit read.

The U.S. climate envoy, John Kerry, and his Chinese counterpart, Xie Zhenhua, brokered the agreement, which they touted in separate news conferences.

Kerry said on Twitter that the deal is “a step in the right direction, a mark of progress and a solid foundation for continued cooperation in climate between our two countries.

“The countries said they will work together on deforestation and hold a bilateral meeting next year about methane, a potent greenhouse gas far more powerful than carbon dioxide at trapping heat in the atmosphere.

The joint statement, which was otherwise light on details, mostly affirmed earlier goals, such as ending overseas coal financing and preserving the 2015 Paris agreement’s target of limiting global temperature rise to 2 degrees Celsius.

INEC to present certificate of return to Soludo on friday