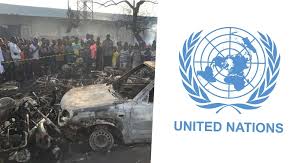 UN has commiserated with the government and people of Sierra Leone over the explosion of a petroleum tanker in Freetown, Oyogist.com reports.

UN Secretary-General António Guterres joined the whole UN system in Sierra Leone in mourning the victims of a fuel tanker collision on Friday night in the capital.

Guterres, in a statement, said he was “deeply saddened by the extensive loss of lives”, resulting from the crash, when the tanker collided with a lorry at a busy junction in the suburb of Wellington, spilling fuel, before igniting.The resulting blaze engulfed other vehicles and pedestrians nearby.

“The secretary-general extends his deep condolences to the people and Government of Sierra Leone and wishes those injured a speedy recovery.

“The United Nations is prepared to provide the necessary support in the aftermath of this tragic incident,’’ he said in a statement by his spokesperson, Stéphane Dujarric.

The UN Office in Sierra Leone also issued a statement wishing “fortitude and peace to the bereaved families, and the Government and people of Sierra Leone, in this period of grief.”