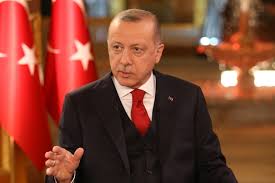 Oyogist has learned that Turkish president, Recep Tayyip Erdogan has confirmed he is not attending COP due to security arrangement issues.

President Recep Tayyip Erdogan had pulled out of the climate summit at the last minute, sources confirmed to oyogist.

Speaking to Turkish media, he confirmed it was due to the UK not meeting Turkey’s demands on security arrangements.

“When our demands were not met we decided not to go to Glasgow,” president told newsmen.