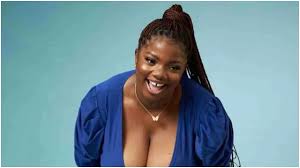 Oyogist has learned that ex BBNaija Housemate, Dorathy has expressed readiness in engaging Lilo and Kooyeh to a console game rematch.

Sharing the update on her official Snapchat page, the reality star held a game control pad at one hand, as she captured her screen.

It seems as if Dorathy has been a huge lover of pes games all this while, as a sony playstation game console was spotted near the television.