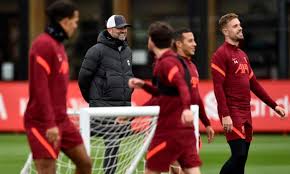 Oyogist has learned that an Italian football legend Arrigo Sacchi, has labelled Jürgen klopp’s Liverpool as a perfect team without any real superstars’.

acchi told Carragher, a former Liverpool star, ‘[Liverpool are] A fantastic team without any real superstars.

A true team.’You see one playing for eleven, while other teams are eleven playing for themselves. 80 per cent of the time, they are moving when they have the ball.’If they were an orchestra they would always be in perfect tune and in perfect time.’

Sacchi had disclosed that the reason behind Liverpool’s unending victories rests with Klopp, who alongside Pep Guardiola is changing the direction of the beautiful game.

Sacchi added: ‘Pep and Klopp are two greats who allow football to move forward. Without coaches like that, football dies,’ he said.’I watched Liverpool play Barcelona [in 2019] and I was emotional.

‘I was emotional because it was not just a team winning, it was an entire city. In the next life, I want to be a coach in England.’