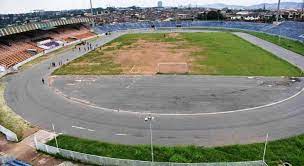 The Minister of Youths and Sports Development, Mr Sunday Dare, over the weekend said the Federal Government, would this week commence repair works on the roof and fixing of the grasses of the main bowl of the Obafemi Awolowo Stadium, formerly known as Liberty Stadium, Oke-Ado, Ibadan in Oyo State.

According to a report by the Nigerian Tribune, he gave the assurance on Saturday when the House of Representatives Committee on Youths and Sports Development paid an assessment visit to the stadium.

Dare, who was represented by the director of procurement for the Federal Ministry of Youths and Sports Development, Mr. Segun Oke maintained that no effort would be spared in restoring the glory of the stadium, which was built by the sage, Chief Obafemi Awolowo.

While observing that the repair work was already captured in the 2021 budget, Dare assured Nigerians that the process would begin in November, thereby turning around the stadium to wear a new look and meet the modern standard.

He contended that the budget would not be rolled over and that after the completion of the items in the budget, the next phase of work at the stadium would be captured in the next budget.

“I can assure you that what is budgeted for the stadium in the 2021 budget will not be rolled over. We are completing the process next week. After the completion of the process, the contractor will move to the site immediately. The way we are moving, as I am speaking with you now, our staff are going to sleep in the office throughout this weekend because we want to make sure we complete the process next week.

“I am giving Nigerians the assurance that we are completing the process next week by the grace of God. We are assuring the National Assembly and the whole nation that this place will wear a new look,” Dare stated.

The deputy chairman, House Committee on Sports, Honourable Afolabi, later informed journalists that the committee members were in the stadium to see things for themselves, saying “we are here to inspect the state of Liberty Stadium, to see if any job has commenced or not because we have appropriated money for the replacement of the roof which was in the 2021 budget.

“We came here physically to see things for ourselves and get the assurance from those who are in charge of the Ministry of Sports Development as regards the starting of the renovation of the roof and grassing of the main bowl. By now, we expected the contractor to be on site. So, we are here to see what is happening and ask some questions from the head of the team in the Ministry of Youths and Sports to tell us the position of things as regards the renovation.

They have promised us that the roofing of this shed will be completed by the end of this year. We are looking at between November and December which is a cycle of two months, and this place will wear a new look.

“This is one of the heritages of sports in this country. We know very soon, things will change for the better. We are working assiduously at the National Assembly to ensure that adequate provision is made in the budget for sports infrastructure and to engage the youth to curb restiveness among them,” he remarked