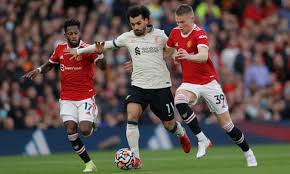 Oyogist has learned that several man United fans reacted to Liverpool’s 5-0 victory at old Trafford in a rather unimaginable way, as many took to their twitter handles to share photos of themselves burning their Jersey’s.

60 minutes into the match, Liverpool were already 5-0 up, as a frustrated Ronaldo kicked a Liverpool striker, Curtis Jones intentionally after he dribbled past him.

Man United Fans had already exited the stadium shamefully, as chants of #OleOut filled the atmosphere.