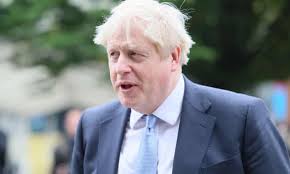 He disclosed this today as the Commons gathered to express its grief at David Amess killing.

The PM told a packed chamber the the attack on the Tory veteran had been ‘contemptible’ and struck at the ‘core’ of what it means to be an MP.
Mr Johnson Futher stated that all MPs mourn with Sir David’s family, adding in the Commons: ‘Sir David was taken from us in a contemptible act of violence striking at the core of what it is to be a member of this House, and violating both the sanctity of the church in which he was killed and the constituency surgery that is so essential to our representative democracy.

But we will not allow the manner of Sir David’s death in any way to detract from his accomplishments as a politician or as a human being.’Sir David was a patriot who believed passionately in this country, in its people and in its future.

“He was also one of the nicest, kindest and most gentle individuals ever to grace these benches.’ Keir Starmer added Labour’s condolences, saying Sir David was ‘a man and a politician we can all learn so much from’. He said making Southend a city was a ‘fitting tribute’