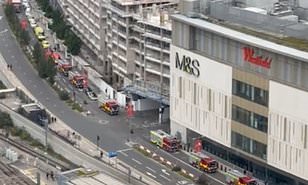 OYOGIST has Learned that several goods Worth millions of naira were destroyed Earlier today in a fire outbreak in a London shopping mall.

Around 40 firefighters and eight engines rushed to Westfield in Stratford this morning after reports of a blaze on the first floor.

Meanwhile Hundreds of customers raced to leave the centre which is near the Olympic Park as smoke filled the main hall.

The situation is currently being handled, although many described it as ‘critical’, though it is yet to be ascertained how far the fire has spread.