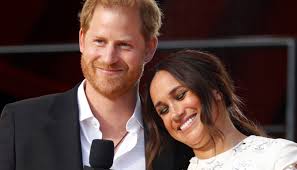 Oyogist has Learned that the Duke and Duchess of Sussex, Harry and his wife Meghan announced they are moving into banking and vowed to ‘change the world’ by putting money into an investment firm called Ethic.

Harry and Meghan’s latest move into big business came after their deals with Netflix and Spotify and the couple announced their latest tie-up with a statement that said: ‘When we invest in each other we change the world’.

“From the world I come from, you don’t talk about investing, right? You don’t have the luxury to invest. That sounds so fancy.’ Meghan said during an interview.

She added: ‘My husband has been saying for years: ‘Gosh, don’t you wish there was a place where if your values were aligned like this, you could put your money to that same sort of thing?’,’ adding the couple were introduced to Ethic by friends. It is not yet known how much they have invested or if they are being paid.
Meghan MarklePrince Harry
Share
0
FacebookTwitterPinterestLinkedinRedditWhatsappTelegramViberEmail