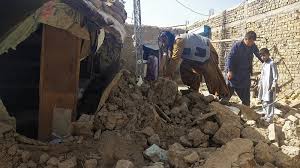 Oyogist has learned that at least 20 people were killed and over 300 others injured after a powerful 5.9 magnitude earthquake hit a mountainous part of Pakistan province on Thursday, collapsing several houses.

The death toll may increase in coming days, according to major sources.

The National Seismic Monitoring Centre in Islamabad had initially reported that the epicentre of the earthquake was near Harnai at a depth of around 15 kilometres.

It also claimed that the “exact damage” has not yet been confirmed.

The quake affected Quetta, Sibi, Harnai, Pishin, Qila Saifullah, Chaman, Ziarat and Zhob in Balochistan.Most of the deaths and injuries were reported from the remote north-eastern district of Harnai.