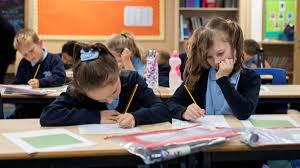 Oyogist has learned that The petrol crisis in the UK has threatened to spill over into education as some schools are left on the brink of not being able to transport, feed or teach their pupils.

Headteachers of several schools in the region are demanding a meeting with Nadhin Zahawi, the new Education Secretary, as dozens of school bus services were cancelled due to unavailability of petrol.

It is believed that some parents had been told their children might not be given food at lunchtime, and milk deliveries to primary schools also faced setbacks.General secretary of the Association of School and College Leaders, Geoff Barton, said he wanted to meet Mr Zahawi ‘as soon as possible’, saying ‘things appear to be getting worse, not better’.

He added: ‘Schools are warning us that they are on a knife edge with staff unable to come into work, attendances down and bus services being cancelled or delayed.

‘This has serious implications for schools and young people. We need to take action now or resort to online learning.

“Two wild boars attacked me in the park”- Shakira reveals