Greece: One dead after earthquake hits island of Crete 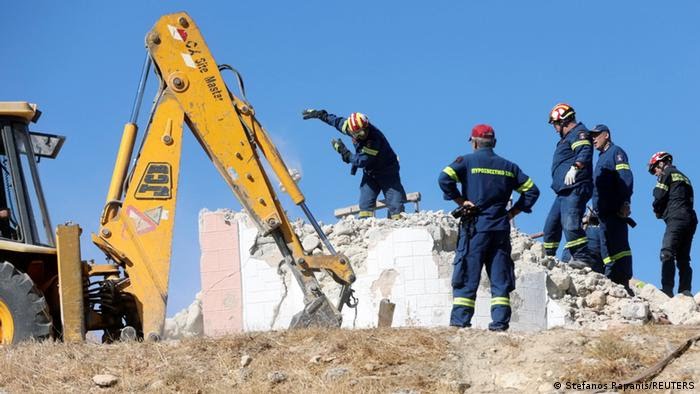 Oyogist.com has learned that a strong earthquake rattled the Greek island of Crete on Monday morning.

It was gathered that some buildings sustained significant damage after a strong earthquake struck the Greek island of Crete. At least one person died and nine were injured as buildings collapsed.

The quake had an initial magnitude of 5.8, the Athens Geodynamic Institute said.

Two people were initially trapped in damaged buildings in the village of Arkalochori, according to officials.

Panicked residents came rushing out of their homes and buildings, as several structures were damaged by the earthquake, authorities said.

Two churches and other old stone buildings in Arkalochori had been damaged, the mayor of the farming town said.

A man died when the dome of a church in Arkalochori caved in during renovation works, the civil protection agency said.

In the capital of Heraklion, children were evacuated from schools which were later inspected for structural damages.

The city’s mayor, Vassilis Lambrinos, also said that emergency services did not report any injuries or severe damage.

“It felt quite strong and lasted many seconds, Lambrinos said.

Initially, the European Mediterranean Seismological Center (EMSC) put the magnitude of the earthquake at 6.5, while the United States Geological Survey (USGS) said it was 6.0.

The institute in Athens said the quake struck at about 9:17 am local time, with an epicenter 246 kilometers southeast of the Greek capital.

Several aftershocks also struck the area. The strongest one had an initial magnitude of 4.6, according to the EMSC.

Nigeria Has No Leadership – Sule Lamido Speaks On Insecurity