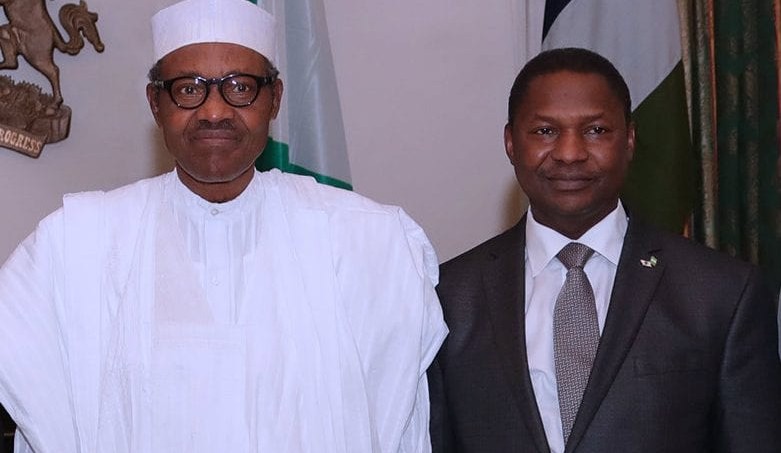 According to report reaching oyogist.com, the Attorney-General of the Federation, Abubakar Malami, has defended the decision of the government not to name terror sponsors at the moment.

The AGF said this while addressing journalists in New York, according to a statement by his Spokesman, Umar Gwandu, on Wednesday.

The Federal Government has come under fire in recent days for failing to name terror sponsors despite the assistance given to Nigeria by the United Arab Emirates and other countries.

The President’s Spokesman, Femi Adesina, had also said the government was not interested in naming and shaming suspects but would rather prosecute them.

Reacting to the raging controversy, Malami said the Federal Government of Nigeria had been vigorously and intensively working to leave no stone unturned in the prosecution of Boko Haram financiers and the fight against terrorism in the country.

According to the statement, the position, as it stands, is that investigation has reached an advanced stage and the government would make a statement in that direction in due course.

He said, “Time is not ripe for holistic disclosures so as not to pre-empt the investigation process.

“The prime object remains the attainment of peace and security of our dear nation.

“As per as terrorism funding and financing is concerned, we have succeeded in identifying those that are allegedly responsible for funding same and we are blocking the leakages associated with funding while embarking on aggressive investigation that is indeed impacting positively in terms of the fight against terrorism.

“The truth of the matter is that investigation is ongoing and advancing. For the purpose of investigation, I would not like to be pre-emptive in terms of making disclosures that will have effect of undermining the successes we are recording,”

Malami said whatever the government does in terms of detention and arrest is indeed backed up by judicial processes.

Malami stated that the Federal Government through the Complex Case Group of the Department of Public Prosecution of the Federation in the Office of the Attorney General of the Federation and Minister of Justice reviewed over 1,000 Boko Haram case files out of which 285 have been filed before the Federal High Court based on prima facie cases of terrorism against them.