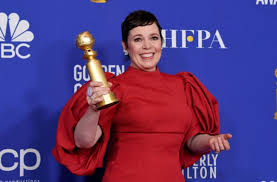 Colman was awarded with the Primetime Emmy Award for Outstanding Lead Actress in a Drama Series.

Colman portrayed Queen Elizabeth II in the third and fourth seasons of the Netflix drama series.

Those nominated for the award include; Uzo Abuda (“In Treatment”), Mj Rodriguez (“Pose”), Emma Corrin (“The Crown”), Elisabeth Moss (“The Handmaid’s Tale”) and Jurnee Smollett (“Lovecraft Country”) for the Emmy.

Recall earlier last year, Colman was nominated for the Emmy for Outstanding Lead Actress in a Drama Series, but lost.

So far, Colman’s work on “The Crown” has received positive feedback worldwide.

Colman has also debuted in recent films such as “The Father” and “The Favourite,” as well as acclaimed series such as “Fleabag” and “Les Misérables.”