“US Achieved Nothing in Afghaistan’ – Russian President, Putin Laments 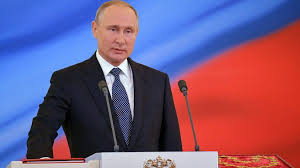 Oyogist has learned that Russian President, Vladimir Putin has said that the United States’ 20-year campaign in Afghanistan ended in tragedies and Washington achieved nothing.

Putin further stated that the US army’s attempt to ingrain their norms in Afghanistan was futile.

The president Disclosed this today during a meeting

with teenagers in the Russian far eastern city of Vladivostok to mark the start of the school year.

He said: “American troops were present on that territory (of Afghanistan) for 20 years, and over those 20 years they were trying – this can be said without offending anyone – to civilise the local people, but in fact, to impose their norms and standards of life in the broadest sense of this word, including the political organisation of society.

“The only result is tragedies and losses for those who were doing that – for the United States – and especially for the people who live on the territory of Afghanistan. This is a zero result, if not negative.”