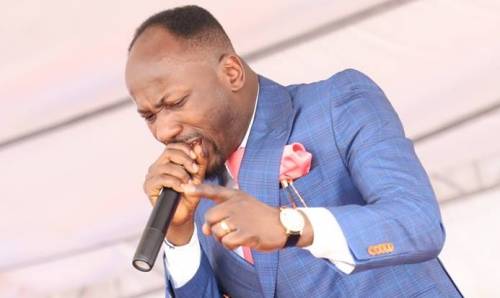 Oyogist has Learned that a Nigerian pastor, Dr Bolaji Akinyemi has written a petition to the Nigeria Police and the United States Government, Asking them to investigate the miracle money session Performed by Senior Pastor and General Overseer, Omega Fire Ministries International, Apostle Johnson Suleman.

In a video containing clips from an Impact 2021 programme in Atlanta, USA in July, Suleman had declared that angels would credit the bank accounts of some members of the congregation.

And as the video showed, many congregants presented their testimonies of receipt of instant credit alerts from “angels”.

“As you get it, run here. Angels will begin to put money in your accounts.

”One congregant who came out even said he received an alert of $989 and 70 cents.“Papa, there is a miracle here,” one said. “You gave your word at about twelve minutes past eight, and it is now thirteen minutes past eight and she has been credited with several zeros.” he said.