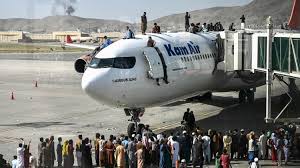 Oyogist has learned that A firefight ensued between unidentified gunmen, Western security forces and Afghan guards earlier today at the North Gate of Kabul airport.

The incident was confirmed by Germany’s armed forces said, as thousands of Afghans and foreigners thronged the airport, seeking to flee Taliban rule.

One Afghan guard was killed and three others were injured in the battle, which also involved US and German forces, the German military said on Twitter, but refused to specify whether the dead Afghan was one of the Taliban fighters deployed to guard the airport.

The kabul airport has been a scene of chaos since the Taliban seized the Afghan capital on August 15 as US and international forces try to evacuate their citizens and vulnerable Afghans.