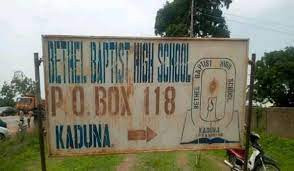 Oyogist.com had learned that the abductors of 121 students from the Bethel Baptist High School, Kaduna have released 15 of the 80 students that are still in their captivity.

Recall that bandits stormed the school located at Damishi along the Kaduna – Kachia highway, Chikun Local Government Area, on the 5th of July and abducted 121 students.

On July 25, the bandits released 28 of the students after receiving N50 million ransom. They made fresh demand of N80million ransom to release the remaining 80 students in captivity.

It was gathered that ransom was paid for release of the 15 students but the amount has not be ascertained yet.

The Chairman of the Kaduna State chapter of the Christian Association of Nigeria (CAN), Rev. Joseph Hayab, confirmed this latest development and said 15 students were released Saturday night, August 21.

The state police or the government is yet to comment on this development.