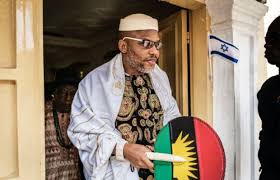 Oyogist has learned that the leader of the Indigenous People of Biafra (IPOB), Mazi Nnamdi Kanu, has reportedly issued a statement, confirming that he would lead the group’s Monday broadcast from the custody of the Department of State Services, DSS.

This was known by Simon Ekpa, the Finland-based member of IPOB.

Recall that IPOB through its spokesperson, Emma Powerful, had sacked and banned Simon Ekpa from broadcasting on Radio Biafra following his refusal to agree to the rules and regulations of the station.

Ekpa further Disclosed that the IPOB leader had asked him to broadcast the topics he (Kanu) decided every Monday on Radio Biafra.

According to him, Nnamdi Kanu would continue to lead the struggle for Biafra from detention.

He wrote: “Mazi Nnamdi Kanu from DSS detention has directed that henceforth, my Mondays’ live broadcast topic will be coming directly from him.

“I am Simon Ekpa, Mazi Nnamdi Kanu’s Disciple on Biafra Restoration. He will continue to lead this struggle from DSS, Aso Rock Detention, from Prison.”

(VIDEO): Moment an anaconda was spotted crossing the road in Brazil