Copyright 2021 - All Right Reserved
Home People Court remands Chidinma Ojukwu, one other in prison for 30 days over alleged murder of Usifo Ataga
People

Court remands Chidinma Ojukwu, one other in prison for 30 days over alleged murder of Usifo Ataga 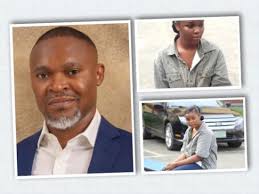 According to reports reaching Oyogist.com, the 300 level Mass Communication student of the University of Lagos, Chidinma Adora Ojukwu, and one Adedapo Quadri, were, on Monday, remanded in prison custody by a Yaba Chief Magistrates’ Court over alleged murder of Chief Executive Officer of Super TV, Usifo Ataga.

Magistrate Mrs Adeola Adedayo remanded her for 30 days in the first instant, pending the legal advice from the Director of Public Prosecution, DPP.

Recall that Chidinma Ojukwu, 21, has been the major suspect in the alleged murder of Super TV boss, Usifo Ataga in a service apartment in Lekki area of Lagos State.

”The opportunities that come with this is huge”- New bbnaija housemate, JMK, reveals she ditched her call to bar ceremony just to be on the show