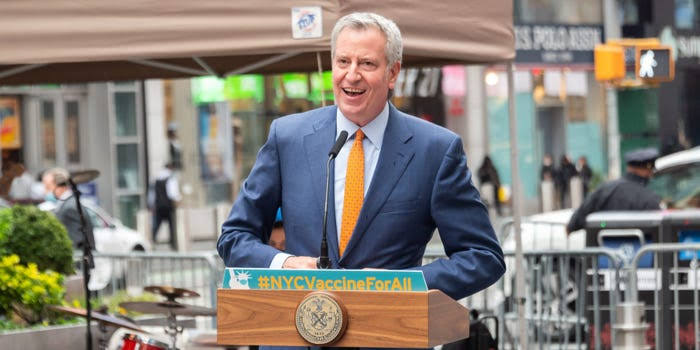 Oyogist.com has learned that New York City will start paying $100 to people who get vaccinated against Covid-19 at a city-run vaccination site, Mayor Bill de Blasio announced Wednesday.

The payments will start Friday for anyone who receives their first dose of the Covid-19 vaccine at one of the city’s vaccination sites, which will be paid in the form of a $100 prepaid debit card.

New Yorkers can find a vaccine site through the city’s Vaccine Finder or by calling 1-877-VAX-4NYC.

The payment is one of a number of vaccine incentives New York City is offering, including subway Metrocards, memberships for cultural attractions, free Shake Shack and a lottery to win stays at local hotels and a $2,500 cash prize.

New York City said Monday that all municipal workers must provide proof of vaccination or submit to weekly Covid-19 tests starting Sept. 13, as the city deals with an increase in infections related to the highly transmissible Delta variant.

“I personally believe that the guarantee that right then and there you’re going to be rewarded, I think that’s going to make a big difference to people,” the mayor said.

When he was questioned about those who have already been vaccinated, de Blasio thanked them for doing “the right thing.”

“But, we understand it’s been a huge amount of misinformation … particularly through social media getting anything but the truth. We got a lot we’ve got to overcome.

“More than 9 million doses of the vaccine have been administered in the city.

The mayor said over 59 percent of the city’s population has received at least one Covid-19 shot, but that’s not enough.

“That misinformation, that fear has hurt,” he said.

“And what’s in all of our interest is to get every single additional person vaccinated.”