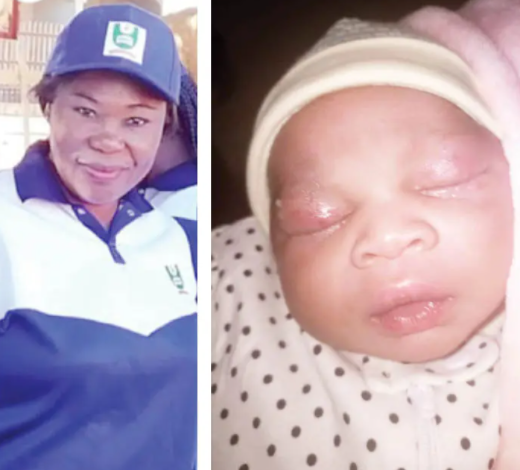 Oyogist.com has learned that a nursing staff at the Usmanu Danfodiyo University Teaching Hospital in Sokoto state, Folasade Adesina, has been arrested after she was accused of piercing the eyes of a newborn baby born in the hospital where she works.

Asma’u Ahmad Tijjani,mother of the baby has revealed in an interview that Adesina inflicted the injuries on her newborn baby over a carryover allegation.

According to Asma’u, Adesina used an injection needle to pierce the eye of her baby a few minutes after she was born in order to avenge a carryover she got at the Sokoto Study Centre of the National Open University of Nigeria (NOUN), where Tijjani worked as non-academic staff.

She said she was shocked to hear this as she is a non-academic staff and can’t possibly be able to give her a carryover.

The management of the hospital has acknowledged receiving the complaint and said an investigation has since commenced.

Below is the statement, signed by Mansur Wadata, the principal information officer of the hospital;

“The hospital received a complaint letter from the mother of a newborn baby girl delivered at the hospital, alleging that a nursing officer caused injury to the eyes of her baby.

The hospital management is investigating the case, with a view to authenticating the claim.

We are assuring the general public that appropriate disciplinary action will be taken against whoever is found wanting, in accordance with civil service rules and condition of service of the hospital.

The hospital is ever ready to work with relevant authorities to carry out investigation to ensure that those involved are made to face the full wrath of the law.
The general public is hereby reassured that the hospital will not derail from its core values for excellent performance – transparency, professionalism, respect for the rights of its clients, and discipline.

While the hospital frowns at any act of indiscipline by any of its staff, it equally assures the general public of its commitment towards ensuring strict discipline against unethical and unprofessional conducts.

To this end, the management of the hospital calls for calm from its clients (patients) and the general public as it will continue to ensure the safety of patients and their relatives.”
Folasade AdesinaSokotoUsmanu Danfodiyo University Teaching Hospital
Share
0
FacebookTwitterPinterestLinkedinRedditWhatsappTelegramViberEmail