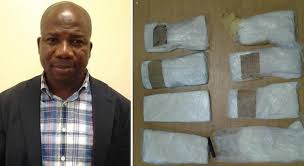 The drug agency in a statement on its official Twitter handle on Wednesday, May 12, disclosed that the politician was arrested at the Murtala Muhammed International Airport (MMIA) in Lagos.

According to the spokesperson for the anti-narcotics agency, Femi Babafemi, the suspect had been on NDLEA’s wanted list as arrest of some traffickers and drug seizures all pointed out to him.

Babafemi said: “The long arm of the law however caught up with the wanted baron at about 9.40 pm on Friday 7th May 2021 while trying to board a Virgin Atlantic airline flight to London, the United Kingdom at the Lagos airport.

“At the point of his arrest, Asekun was caught with a kilogramme of cocaine concealed in five pairs of palm slippers packed inside his suitcase.”

“Tesla will no longer accept Bitcoin payments, but will still hold,” – Elon Musk