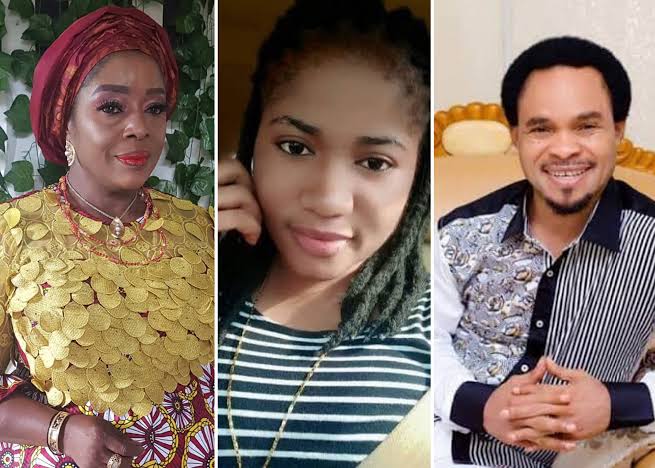 Oyogist.com has learned that Nigerians on social media has called out Anambra prophet, Chukwuemeka Odumeje alongside Nollywood actress, Rita Edochie for allegedly playing a part in the death of comedienne, Ada Jesus.

Ada Jesus was confirmed dead on Wednesday after suffering from kidney ailment.

According to sources, Ada Jesus had accused Prophet Odumeje of conniving with Rita Edochie to stage miracles.

She (Ada Jesus) later became ill with renal failure and was admitted to the hospital, where she begged Odumeje to forgive her, which he later did.

However, Nigerians have taken to social media blaming Prophet Odumeje and Rita Edochie for her death.

“ If it’s true that Ada Jesus is dead, then I hope Odumeje, Rita Edochie and Desmond Elliot are finally happy.”

@Mo4tea: “If you ever refer to Odumeje as a man of God, may thunder strike you dead. How he took an egoistic responsibility of inflicting Ada Jesus with a disease, distracting the family from seeking early medical care.”

@Menzem2: “Odumeje and Rita Edochie oya go and feast on Ada Jesus flesh. The antelope you shot at has died.”

@Capable05 wrote: “ Police please go and arrest that fake Pastor Odumeje and that actress Rita Edochie for publicity admiring of being responsible for the ailment that finally killed Ada Jesus. They are both evil.”

@Nasirudeen opined: “Don’t believe Odumeje and Rita responsible for death of #AdaJesus but they should be legally punish for their comments when the poor girl was seeking forgiveness, come to think of it, if it’s poor witch make such convection people’s would’ve stone them to death.”

@Odogwuachina commented; “ Ada Jesus is dead. Odumeje just got another bragging right even when he has nothing to do with it but we all know who he is. We won’t hear word again. His God must be so dangerous.”