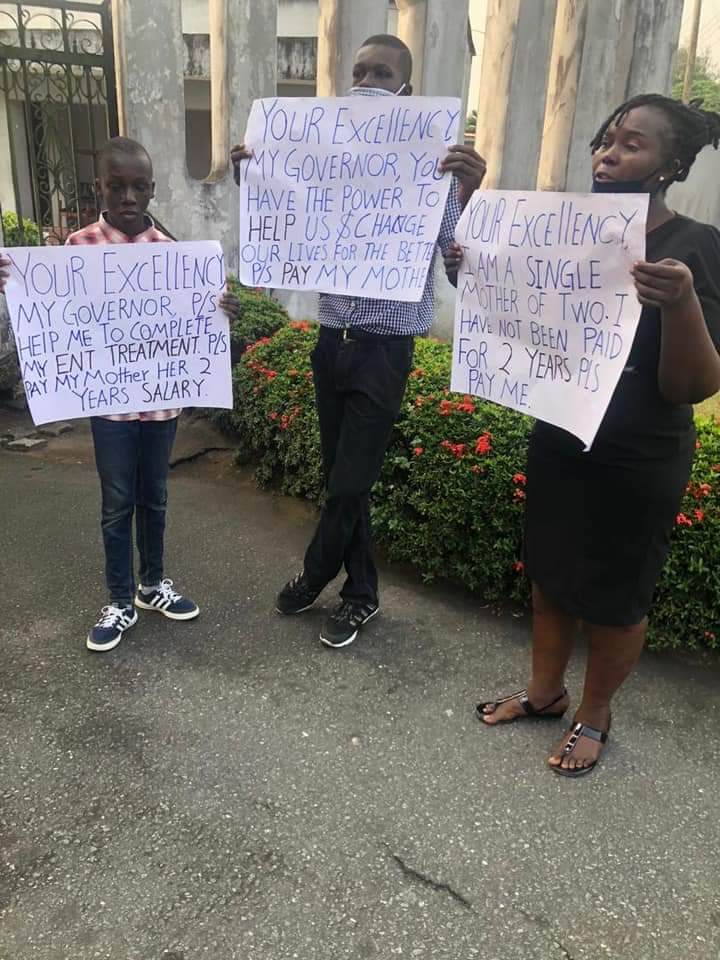 Safiya Ashipu, a chief magistrate in Odukpani local government area of Cross River state, has staged a protest at the governor’s office over the non-payment of her two-year salaries.

A single mother of two, Ashipu was seen together with her sons early Monday morning, wielding placards ahead in front of the governor’s office in Calabar.

“Your excellency, i’m a mother of two. I even have not been paid for two years, please pay me,” the placard read.

Another placard held by one among her son’s read: “Your excellency, my governor, you have the power to help us and change our lives, for the better. Please pay our mother.”

“Your excellency my governor, please help me to complete my ENT (ear, nose and throat) treatment. Please pay my mother her two years salary,” the second son’s placard read.

Not long, Ashipu’s lone protest prompted 28 of her colleagues including Solomon Abua, a chief magistrate, to join within the protest.

Abua said 45 magistrates were appointed in 2019.

Out of the 45, he said 29 of them came from private practice while others were brought in from the state’s ministry of justice.

He said this suggests that 29 of them from private practice haven’t been paid and people from the justice ministry are not being paid as magistrates even though they’ll are collecting salaries as lawyers under the state ministry.

Abua said they have written several memos on the difficulty but nothing has changed.

He appealed to Benedict Ayade, the governor, to facilitate payment of their salaries.