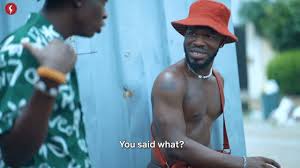 The skit which dropped at about 12am on Saturday, 28th may 2022 saw OGB Recent playing his usual ‘cultist’ role, as he spiced it up alongside Malam Suberu.

After picking a bag full with money from the street, shaggi connived with OGB Recent to collect the money from suberu.

However, things went berserk when suberu disclosed the initial source of the money, but it was too late for them to go back as they were already held up in a shrine where the money came from.