Copyright 2021 - All Right Reserved
Home Celebrities (VIDEO) “My dad and Funke Akindele both cheat on each other, JJC Skillz’s son, Benito Alleges
CelebritiesEntertainment

(VIDEO) “My dad and Funke Akindele both cheat on each other, JJC Skillz’s son, Benito Alleges 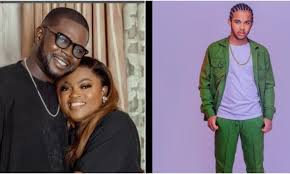 Benito, the estranged son of JJC Skills, husband of nollywood actress, Funke Akindele has spilled more details regarding his dad’s relationship with the actress, Oyogist reports.

Benito in a viral video currently circulating online disclosed that both married couple are not really together as it appears to be.

According to him, “My dad and Funke Akindele both cheat on each other, they are not really together, he stated further.

Meanwhile, few hours ago, JJC Skillz’s ex-wife Mella stirred mixed reactions on social media over a statement she made while reacting to a video of their son Benito smoking.

Mella took to her Instastory to share a photo of her son smoking and added a caption saying she can’t wait to have him at home.

Her statement has stirred reactions among Nigerians, with some stressing that she should have rebuked her son for smoking