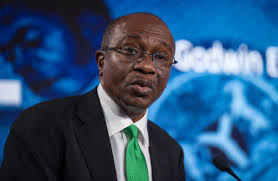 This comes few hours after APC Chairman confirmed that Emefiele is a member of the ruling party.

Reno, who described the CBN Governor as a ‘Goner’, also called on Nigerians to vote the ruling party out in the forthcoming presidential election.

“Now that the APC Chairman has confirmed that the CBN Governor, Godwin Emefiele, is a member of the All Progressives Congress, his position is untenable and I call on him to resign immediately.

“The office of the Governor of CBN should be apolitical, and we are all witnesses to the damage that accrued to Nigeria when Sanusi Lamido politicised that office, with the consequence that sensitive national documents were leaked to the APC in 2013-2014.

“Nigeria’s economy needs an independent CBN Governor, who can speak truth to power and refuse to toe the ruling party line. By being a confirmed member of the ruling party, Godwin Emefiele now suffers from an irredeemable conflict of interest, and must go or be sacked!

“The fact that he is now a confirmed member of the ruling party makes his denial of purchasing the APC Presidential ticket very hollow and unbelievable. If Godwin Emefiele refuses to resign and he is not sacked, then I call on Nigerians to make the APC pay very dearly in 2023, for politicising an institution that should not be politicised under any circumstances!

“Finally, the APC Chairman’s confirmation of Godwin Emefiele’s membership of his party casts this photograph of the CBN Governor bowing down to strong members of Buhari’s greedy and rapacious cabal in new light. Emefiele has reached the end of the road. He is a goner! #TableShaker

Elon Musk Stirs Reactions After Posting An Update On His Death