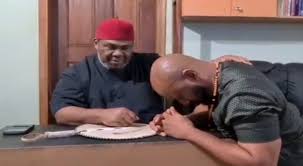 Hours after Nollywood Actor, Yul Edochie Openly announced the arrival of his new wife, netizens took time to dig out an old post made by his father, Pete Edochie, Oyogist reports.

Pete Edochie in the post, berated men who are married to two wives, stating that marrying two men doesn’t mean you’re a man, it just means you’re about to suffer and breed confusion among your generations.

Putin Warns Of ‘Lightning Response’ To Intervention In Ukraine

I need a man, but I won’t interact with a broke man – BBNaija’s Khloe