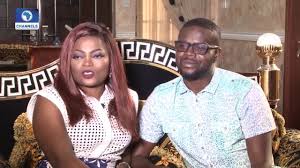 According to the blog, the mother of twins and her husband are having it rough with one another.

In a report shared via the image-sharing platform, Instagram, Funke Akindele reportedly accused JJC Skillz of mismanaging funds generated from their business.

According to sources in Nigeria and majority in London, Funke and JJC Skillz’ marriage is going through some hardtimes to the extent that Funke reacting in anger verbally told JJC Skillz “Leave my house”.

Sources present when the heated argument happened in their Amen Estate home quoted Funke saying “O ko owo mi je” when they tried calming her down.

Controversial Singer, Portable causes traffic as he sprays money in the middle of a busy road (WATCH VIDEO)