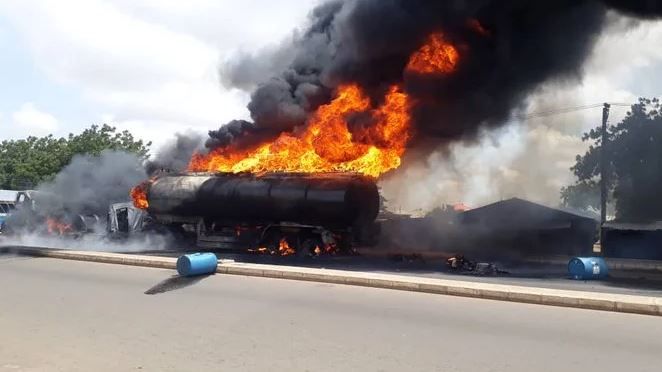 According to reports reaching oyogist.com, a petrol tanker has exploded at Ijora Pallete Junction beside the Lagos State Homes Estate at Ijora Badiya, Lagos State on Thursday.

The explosion reportedly occurred at 1.30 p.m.

An eyewitness told the News Agency of Nigeria (NAN) that the tanker was leaking and some passers-by drew the driver’s attention to the leakage.

The eyewitness said the driver consequently got down and attempted to use a fire extinguisher on the tanker before it exploded.

Firefighters and a team from Ijora Badiya Police Division were on ground to secure lives and property.

They eventually put out the fire and no life was lost in the accident.

The police have diverted traffic from the road to prevent traffic congestion and prevent hoodlums from attacking innocent citizens.

According to a police officer, who pleaded anonymity, the police responded swiftly to the emergency and contacted the fire service which also responded fast.

UPDATE: US Cybercrime Expert Reacts To Reports Of Hushpuppi Laundering $400,000 In Prison