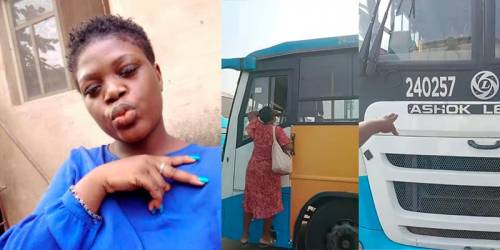 Oyogist has learned that Andrew Nice, the driver of the Bus Rapid Transit (BRT) that was boarded by late, Oluwabamise Ayanwole has shared his side of the story while dissociating himself with her killers.

During Interrogation, the 47-year-old suspect, said he picked up Bamise from Chevron and three other male passengers at Agungi, Lagos.

He said while they were moving, the guys he picked up from Agungi brought out weapons and ordered him to stop after the overhead bridge.

He further Disclosed that he was gripped by fear and this made him obey all their instructions.

Read his statement below;

“When those guys showed me the weapon, I was kind of, I can’t be myself anymore. Fear has come in me. Whatever he told me was what I do. When I followed that Carter bridge, after the overhead bridge, they ordered me to stop them.”

“They ordered me to stop and said I should open the door. When I opened the door, they came down and started dragging her. When I saw she was crying for help, I was helpless. I was thinking she was inside the vehicle holding the iron. Sir, I moved on”.

“That’s the truth sir. I have no connection with any one of them, there were just passengers”