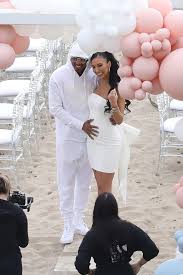 Oyogist.com has learned that American comedian and TV host, Nick Cannon is reportedly expecting his eighth child with Bre Tiesi.

This is according to several reports as he hosted a gender reveal party with Tiesi over the weekend in California.

Cannon and Tiesi gathered together with a small group of friends and surrounded by pink and white balloons.

This would be the eighth child for Cannon, who welcomed four children in the past 14 months — daughter Powerful Queen Cannon, welcomed with Brittany Bell; twin sons Zion Mixolydian Cannon and Zillion Heir Cannon with Abby De La Rosa; and Zen with Alyssa Scott. He also shares twins, Monroe and Moroccan, with his ex-wife Mariah Carey, and another son, Golden “Sagon” Cannon, with Bell. Sadly, Zen died at just 5 months old in December due to complications with brain cancer.