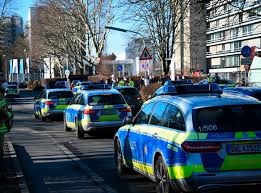 Oyogist has learned that a lone gunman has been confirmed dead after injuring several people in a university lecture hall in the town of Heidelberg, according to German police.

The gunman was said to have been in possession of a “long gun”.

A large operation including emergency services is under way in the Neuenheimer Feld area of the town as is not yet to be ascertained how many people have been injured.

Heidelberg is a university town in the southwest of Germany.