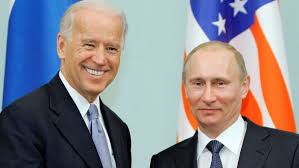 Oyogist has learned that US president, Joe Biden has warned President Putin” to desist from moving any assembled Russian units across the Ukrainian border.

According to Biden, any form of invasion, would be met with a “severe and coordinated economic response,” which has been “laid out very clearly with President Putin”.

He also acknowledged that Russia could “use measures other than overt military actions,” and referenced the incursion into the Donbas region, where “grey zone attacks” were undertaken by “Russian soldiers not wearing Russian uniform”.

Mr Biden appeared to be clarifying his stance regarding America’s position with its NATO allies after he was heavily criticised for saying a “minor incursion” would elicit a lesser response.