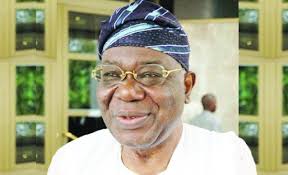 According to reports reaching Oyogist.com, Chief Ernest Shonekan, the former head of the Interim National Government that succeeded the military junta of General Ibrahim Babangida, is dead.

Shonekan, a boardroom guru before his selection to head the Interim National Government, died in Lagos at the age of 85.

He was the Chairman of the interim National Government between August 26 and November 17 1993 when he was ousted in a palace coup led by late General Sani Abacha who was Secretary of Defence.

The family also confirmed the demise of their patriarch, adding that further details would be released in a statement on Tuesday signed by Adeboye Shonekan.

It read, “To the glory of the Almighty, the Shonekan family announces the passing of our patriarch, loving husband to Margaret, dutiful father to us all and former Head of State, Chief Ernest, Adegunle, Oladeinde Shonekan, GCFR, CBE, the Baba Sale of Egbaland.

“He passed this morning of natural causes at the age of 85.

“The family will release further details in due course.”