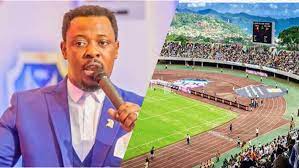 According to report reaching oyogist.com, Prophet Nigel Gaisie of the True Word Fire Prophetic Ministries has warned of a terrorist attack during the upcoming Africa Cup of Nations, AFCON, in Cameroon.

Gaisie disclosed that he foresaw terrorists detonating explosives in a stadium during the AFCON tournament.

Addressing his members, the Ghanaian-based prophet urged participating countries to be prayerful in averting disaster during the tournament in Cameroon.

According to Prophet Gaisie: “This is an international prophecy. The Lord carried my spirit into a place like Cameroon concerning the 2021 Africa Cup of Nations.

“I saw something like players standing on a stretcher and they were in pain as some of them were crying.

“Let the nation Cameroon pray and any other qualified team also do same because I’m seeing something like a terrorist attack and explosive attacks.

“I’m seeing that something happened at the stadium and the whole place was in disorder and people died.”

“If they try to make a northerner next President, disaster will happen”- Mbaka