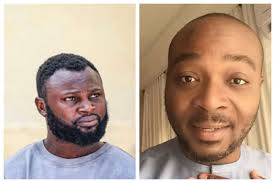 Oyogist.com has learned that the Police has arrested a ‘hit-and-run driver’ on Friday over death of Vanguard reporter, Tordue Salem.

Oyogist had earlier reported about how the missing Vanguard newspaper reporter, Tordue Salem was found dead on Thursday.

Clement, the 29-year-old suspect, was paraded during a briefing at the force headquarters.

, a house of representatives correspondent, was declared missing after he was last seen on October 13.

The police spokesman said Itoro was arrested following an investigation by the force intelligence bureau.

He said after Itoro hit the reporter, “the victim’s phone, an iPhone, fell on the car’s windscreen”.

Mba said the police operatives were able to use the phone to track the suspect to Good Friends Garden where he parks his car.

Explaining why he did not stop after knocking down the reporter, Itoro said the area is known for criminal activities.

He said: “I thought it was an armed robber that I knocked down until the following day when I saw a smashed phone on my windscreen. The phone was not working again so I threw it away.

“The place I knocked this person down is a criminal place, everybody knows that place.”