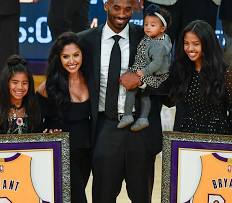 Oyogist.com has learned that the family of late Kobe Bryant’s family is set to receive $400 million from BodyArmor Sale.

In a deal where Coca-Cola is buying full control of BodyArmor, the sports drink company, the Kobe Bryant estate will make roughly $400 million for its stake in the company,Coke announced it bought the company for $5.6 billion in a cash deal.

“If it wasn’t for Kobe Bryant’s vision and belief, BODYARMOR would not have been able to achieve the success we had,” Mike Repole, founder of BodyArmor, said in the release.

“I couldn’t be more excited to become part of the Coca-Cola family and set our sights on the future.”

Coke bought 15% stake in the company back in 2018, then earned an additional 15% equity stake when it took over distribution of BodyArmor.

The company plans to buy the final 70% from a group of founders and investors that include pro athletes like Bryant, Mike Trout and James Harden.

Bryant invested $6 million in the company, per the report. The late Lakers star became a major shareholder in the company in 2013, according to the release.

Coke’s acquisition of BodyArmor is the company’s largest in its history. Previously, it was $5.1 billion for Costa Coffee back in 2018.

Actor Odunlade Adekola professes undying love to his Wife, Ruth As She Clocks 40