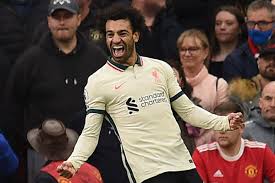 Oyogist.com has learned that Mohamed Salah has overtaken Drogba to become the highest-scoring African player as Liverpool thrashed Manchester United 5-0 in the Premier League on Sunday.

Drogba was the record-holder with 104 goals in 254 appearances in the English top-flight, but Salah has now eclipsed his former Chelsea teammate with 107 strikes in just 167 outings.

Two of the goals were scored during his time at Chelsea and he has now struck 105 in 154 matches for Liverpool.

Sadio Mane is also high up the charts of African scorers in the Premier League, having netted 100 goals.

Salah made further Liverpool history with his first goal of the game against Ole Gunnar Solskjaer‘s side.

He is the first ever Reds player to score in three consecutive matches at Old Trafford, and has now scored in 10 straight appearances in all competitions.

Additionally, Salah has become the first player in more than 18 years to score a treble for an away team at Old Trafford, matching Ronaldo‘s feat for Real Madrid in 2003.

Declaring bandits as terrorists’ll come at a price —Gumi