Copyright 2021 - All Right Reserved
Home Celebrities Veteran Actor, Kenneth Okonkwo Tells Fans To Quit Their Relationships if they no longer communicate well with their patners
Celebrities

Veteran Actor, Kenneth Okonkwo Tells Fans To Quit Their Relationships if they no longer communicate well with their patners 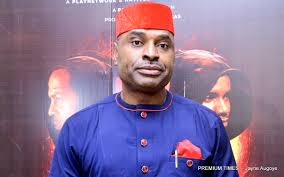 Kenneth via his Facebook post has said that a break-down in communication in relationships can destroy the relationship.

The highly respected actor said that in as much as talking about issues in relationships is exhausting, it is better than ineffective relationship destroying the relationship.

“The worst possible thing that can happen to any relationship is for partners to second-guess each other due to a break-down in our lack of communication.

“But I have to say this: If your relationship has gotten to that point where you no longer communicate your feelings to each other because you think that doing so is a waste of time. Please, quit it.

“It’s better to liberate yourself from the emotional, psychological, and mental torture than to remain stuck in it, because surely, what you have going is not a relationship. It’s perpetual suffering.”