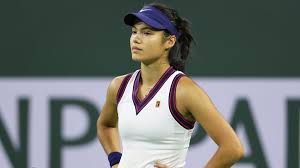 Oyogist has learned that British tennis star, Emma Raducanu has lost to world number 100 in her first match since she won the US Open and split ways with her longtime coach Andrew Richardson.

The champion of New York was beaten on her first appearance since Flushing Meadows, going down 6-2 6-4 to Aliaksandra Sasnovich at the BNP Paribas Open.

Reacting to her defeat, Emma said;

“You can easily get sucked into being so focused on the result and getting disappointed.

She continued: ‘I haven’t had much experience with night matches. I’ve only played one before on (Arthur) Ashe. I’m still very, very new to the tour.

‘I think that experience just comes from playing week in, week out.

I’m kind of glad that what happened today happened so I can learn and take it as a lesson. So going forward I’ll have more experienced banked.

‘Aliaksandra played a great match. You could tell she’s more experienced than me. She went out there and executed her game plan better than I did.’