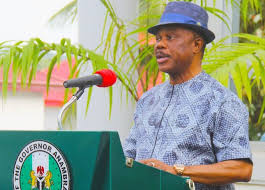 Governor of Anambra State, Willie Obiano, has reacted to the death of Chike Akunyili, husband of the late Dora Akunyili, ex-minister of information and communications, Oyogist.com reports.

Willie blamed “invaders” for the recent killings in the state, including the attack on Chike Akunyili, husband of the late Dora Akunyili, ex-minister of information and communications.

Chike Akunyili was killed on Tuesday, following an attack by gunmen in Anambra.

Obiano, in a state broadcast on Wednesday, condemned the killing, and said he believes that Anambra people are not behind such attacks.

He announced a N20 million reward for information on the perpetrators, and urged security agencies to speed up efforts to find the attackers.

“It is on a very sad note that I address the state today to condemn in very strong terms, the violence that has been witnessed in Anambra in the past few days.

Since last weekend, some armed persons have unleashed terror with sporadic attacks on innocent citizens in various parts of the state,” he said.

“From the briefings I have received from security commanders, offices of some political parties, branded campaign vehicles and individuals occupying them have been attacked with killings and burning of vehicles observed. innocent road users have become victims of this menace with many losing their lives and others, their properties.

“Between Sunday 26th and yesterday, 28th September, 2021, attacks on citizens at Oko, Agulu, Obosi, Nkpor, Nnobi, Nnewi and other places have left about 10 people dead, including an illustrious son of this state, Dr Chike Akunyili, husband of late professor Dora Akunyili, who was reportedly gunned down yesterday around Nkpor.

“These are our own people dying every day and for what reason? Ndi Anambra, these attacks and accompanying deaths cannot be justified and must stop now. I have therefore conducted an extensive security meeting and have directed all security agencies to step up and confront this monster ravaging our land.

“To reinforce our commitment and seriousness on this issue, I, on behalf of the state government, wish to announce a N20 million reward for any useful information leading to the arrest of the perpetrators of these heinous attacks on our state. I urge citizens to report to us, anybody bearing firearm who is not a security or vigilante personnel, so we can deal with this monster, once and for all. Call 07039194332 or approach any security deployment if you have any information.

“I urge all citizens of the state to unite in this fight against all forms of terror, intimidation and tyranny. We will not succumb to invaders as I am convinced that no Anambra son will indulge in this kind of heartlessness. I warn all those promoting and participating in these violent attacks to leave our state or pay a high price as we will definitely catch up with them”

He expressed condolences to the families of victims, and called on “youths, traditional rulers, presidents-general, clergymen, vigilante groups and all leadership structures” to support the efforts of security agencies to restore order to the state.