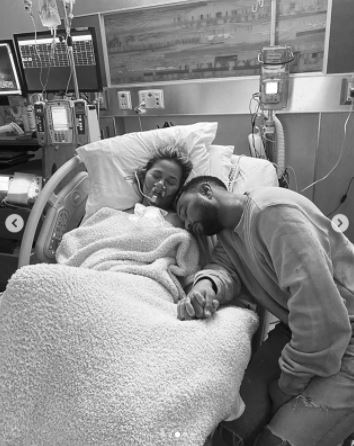 Oyogist.com has learned that American model and television personality, Chrissy Teigen has penned an emotional post to her late son, Jack, whom she lost to pregnancy complications in 2020.

Wife to popular singer John Legend, Teigen took to her Instagram page on Wednesday to express her sadness a year after the devastating incident.

Posting a picture of herself with her husband on the hospital bed, the mother of two said the loss gave her the greatest pain she could ever imagine.

“And to the son we almost had. A year ago you gave me the greatest pain I could ever imagine to show me I could survive anything even if I didn’t want to. I didn’t get to take care of you, but you came and went to get me to love myself and take care of myself because our bodies are precious and life is a miracle,” she wrote in the caption.

“They told me it would get easier but yeah, that hasn’t started yet. Mom and dad love you forever,” she continued.

In her Instagram stories, Teigen also shared that she had been sick and unable to sleep as she sobbed all night. These, she said, happened after her phone “popped up a memory of being in the hospital exactly a year ago, losing our baby.”

In a heart-wrenching and controversial Instagram post last year, Chrissy had given details of how the couple lost their third pregnancy. Diagnosed with partial placenta abruption, she was admitted to the hospital after persistent bleeding and given multiple blood transfusions.

Unfortunately, she disclosed that they were “never able to stop the bleeding and give our baby the fluids he needed, despite bags and bags of blood transfusions. It just wasn’t enough.”