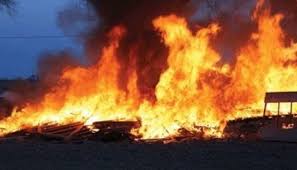 Oyogist.com has learned that Fire has gutted a warehouse on Moshood Abiola Way, in the Ijora 7-Up area of Apapa-Iganmu, Lagos State.

Director, Lagos State Fire and Rescue Service, Margaret Adeseye, confirmed the incident, said the cause of the fire is still unknown, adding that efforts were on to salvage the situation.

She said, “The Lagos State Fire and Rescue Service is presently attending to a warehouse fire at 243, Moshood Abiola Way, Ijora 7-Up, Apapa-Iganmu LCDA, Lagos.

“The fire which was reported around 11.04 am on Sunday saw the deployment of Sari Iganmu Fire Station to douse the fire that is involving some private warehouses used to trade and stock frozen fish and take-away plastic packs.

“The fire, which its cause is yet unknown has been contained to the warehouse block where it emanated from while other four warehouses blocks were currently being saved without any injury or death. Firefighting operations are ongoing as further details will follow.”