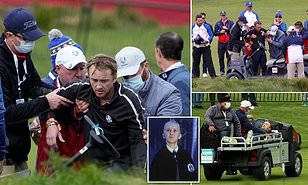 Oyogist has learned that There were fears for the health of Harry Potter actor Tom Felton earlier today after he collapsed during a celebrity round of golf ahead of the Ryder Cup.

The actor, 34, was carried up by colleagues after he fainted at the course in Whistling Straits, Sheboygan, Wisconsin, earlier today.

Felton, who plays Draco Malfoy in the wizarding film franchise, was surrounded by concerned onlookers during the session in advance of the competition between Europe and the United States, which is scheduled to begin today.

After receiving immediate attention he was then laid down on a cart and driven away for further treatment.